The visit of Grand Master Choi Jung Hwa and Grand Master Han Sam Soo to the lab, along with their two day Master Class for United ITF Australia, gave me cause to consider the areas of martial arts research that are ripe for pursuing. These are things that are part of the DNA of what we think about at my dojang, the United Schools of Martial Arts, under Master Spiridon Cariotis, but also gel very much with my research into sensory-motor integration, cognitive skills and expert skilled performance.

There are many interesting research questions to investigate in terms of technique. Firstly, it is important to identify the correct attacking or defensive tool and the trajectory required to bring that tool to its intended target with maximum efficiency (ususally force?). It seems to me that General Choi’s taekwon-do is the only martial art that describes attacking and defensive tools with sufficient clarity to be able to build a detailed understanding of (for example) 18 different sidekicks. Unfortunately, I don’t think that many instructors understand the nuances of different sub-techniques, nor do many of them understand the biomechanical and cognitive constraints of human movement.

So while it is important to consider the forward momentum and movement of mass to impart maximum force on a target, it is also important to first consider what weapon is being used (ball of the foot, foot sole, toes, back heel etc) and the required shape of the foot and trajectory of the leg to impart maximum force on a target. The trajectory to impart maximum power must take into account the muscular arrangement and joint articulation of the human body, and must also take into account the question of whether blunt force, or impulsive force is being imparted and whether the trajectory to the point of impact is linear or rotational. For a straight line blunt force action, the point of impact is not as critical as for an impulsive force, and particularly for an impulsive force being delivered in a circular motion.

It is also important to note that increasing velocity has more effect on power than increasing mass. Thus for maximally effective kicking and punching, the velocity, not the mass behind the technique is the most important element. Many of the adjustment to technique such as rotating hips, shoulders etc will impart more mass as well as more velocity, but it is the twisting and tensing at the point of impact that will impart force to the target. It should be noted that it is not really clear how and where to measure force delivered to the target, and it is not even clear that force is the relevant construct in terms of effectiveness. The important thing is to deliver exactly the right amount of force for the technique and the situation. Considered at a deeper level, the situation might change at any point during the planning and execution of a technique, so the most effective technique will also have the latest point of commitment and greatest amount of control without sacrificing too much potential energy.

Balance is paramount in such a framework because only through appropriate balance can you ensure the possibility of dealing with a changing situation. And there is neuroscience research evidence that some parameters of ballistic movements such as eye saccades can be updated even during execution. While it might be correct that the maximum amount of force will be generated on a static target by increasing the distance of the movement (starting the acceleration of the movement from further away), the greater distance of travel will incur a greater time period and spatial area of commitment to a known trajectory. This is irrelevant in the context of a static target such as a punching bag but is of paramount importance when fighting against a trained opponent. The last thing you want is for your opponent to know where you will be, and where your attack is coming from.

While taekwon-do has a philosophy of one attack to take out your opponent, my interpretation of this is not that you would only invest in one technique. I would never aim to incapacitate my opponent with a jab, but I would certainly use the jab and a number of other lead-in attacks a) to buy time, and b) to set up my opponent for the one take-out technique. So only one fully committed cross, or one well executed smashing kick or elbow strike should be required to take out my opponent (if that is my need), but it might take a few strategically executed lead-in techniques to position my opponent for the take out.

In order to undertake research on technical aspects of martial arts, it is important to understand not only the physics of the technique, the biomechanics of execution, and the tactical and strategic aspects of implementation, but also to understand the cognitive framework within which the technique is being executed. I believe the encyclopedia provides great insight into this, but even so, there is not a clear consensus on how techniques should be broken down to teach them with maximum effectiveness for different body types and desired outcomes.

One aspect of martial arts training that has not received much attention is how to train strategic thinking, and how strategies of self-defence might differ for people of different ages, gender, size and appearance. There is also scant attention paid to interpreting the intentions of others. Much of the training implicit in self defence involves learning how to project your body language to ensure that you communicate appropriate messages: i.e., you diffuse tension in a standoff situation or you increase alertness in a group which is not aware of impending danger. Efficiency of movement, appropriate relaxation/tension, appropriate degrees of alertness all communicate certain things. The modes of diffusion or escalation of tension available to male versus female protagonists, or children versus adults are often different and complementary, and it is important to understand that modes of behaviour are also linked with culture and social standing.

It was interesting to hear at the Masterclass that there is no Western equivalent to the term “Do” or “way of”. While it is possibly true that the concept is spread among a number of different words (philosophy, moral code, moral culture, discipline), it is not a construct unknown to the West. Any form of master-apprentice relationship has the implicit understanding that there is a “way of” that is learned initially by observation and then by an increasing level of legitimate peripheral participation in the discipline or practice. The very notion of a discipline incorporates “way of”.

There is also an implicit tension in transposing the Do of an art form from one cultural context to another. While General Choi wanted taekwon-do to be for everyone irrespective of religion, race or creed, it would be disingenuous to suggest that there was no underlying agenda for spreading Korean culture through spreading taekwon-do. It is very important to establish protocols for interaction in the dojang and on the mat and it is appropriate for a Korean martial art to reflect its origins, but there are difficulties in terms of protocols outside the dojang particularly where cultural modes of interaction are very different.

It is a matter for sociocultural and psychosocial research to investigate the degree to which cultural differences impinge on the ability to communicate respect, and which cultural practices should be adopted if there are conflicting interpretations. For example, the notion that eyes down denotes humility and respect can be countered with the notion that eyes down suggests something to hide and an attempt at deception, or suggests subservience – a state entirely at odds with the state of humility. Subservience and humility generate quite different expectations in terms of behaviour in different circumstances.

It is important to point out that there must be the highest degree of integrity for any culture in which rank is of paramount importance. Any corruption of the system of rank destroys the integrity of the entire system. It is not possible to fix such a system without pruning the corrupt branch from above. The system of rank is in stark contrast to a merit based system. If rank in taekwon-do is awarded purely by the amount of time or money given to an organisation,the organisation will be very susceptible to failure. Not all practitioners have the capability or perserverence or moral character to achieve the highest ranks, and the organisation will be as weak as the weakest link, and more so if the weak links are higher in rank. Moreover there is no endorsed way of correcting the corruption of the weak links from below without breaking the moral code of the system.

This is not a trivial issue for rank based systems. The military systems of the west are being confronted with complex issues regarding training methods and discipline. There is an emphasis on political correctness and little regard for the nature of the actual job military personnel are being trained for and the degree of horror it might entail. There is little understanding of the need for strict discipline in the context of life and death decisions, and in the context of needing to kill or be killed.

Sport versus Art of Self Defence

The notion of taekwondo and other martial arts as combat sports is something I have addressed previously. A focus on scoring points in the sport forms of judo and Olympic taekwondo has led to a disconnect with the underlying logic of self-defence inherent in the martial arts from which they were derived. On the other hand, professional combat sports have lost their moral code. Combat sports retain the forceful effectiveness of martial arts techniques, but have lost much of the connection with the respect and honour implicit in the traditional martial arts, which share the basic tenet of building a more peaceful world in which the martial artist shows humility for the sake of humanity, such that the human prevails over the ‘animal’ as civilisations advance.

The Role of the Instructor

I have also considered the role of the instructor here

A Curriculum for “Women and Children”

A big challenge for martial arts instruction is the fact that most training programs in martial arts were designed for young men at the peak of their physical development and planning on, or engaged in, some form of military training. However one of the main demographics for martial arts instruction in the Western world is young children. Some children choose martial arts as their activity because they are active, energetic and motivated by starring in their own imaginary “superhero” narrative. But often parents choose martial arts as the activity for their shy, or socially-isolated, or physically smaller child who is suffering from, or as protection against, bullying. These children have different motivations and different needs, but specifically, the most important things for them to learn early in training are not techniques to hit things hard, but the mental skills to control their physical and emotional reactions.

Similarly, women make up one of the key demographics interested in learning self-defence. Effective self-defence has a different focus from effective point-scoring in tournaments, but at the same time, tournament sparring is probably one of the key performance situations that gives women an opportunity to learn to control their fear when under physical threat. Many women who want to learn self-defence do not have sufficient strength or speed of movement to exert effective force. While most men can build appropriate physical skills for taekwondo through practising taekwondo techniques, women may need to simultaneously engage in building upper body strength to allow for effective skill development in the context of applying and absorbing forceful physical contact safely. 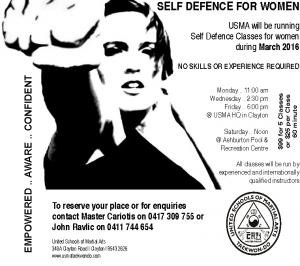